The 140-mile march from Philadelphia against money in politics ended in Washington D.C. with a week of civil protests. Over 600 activists have been arrested to date. 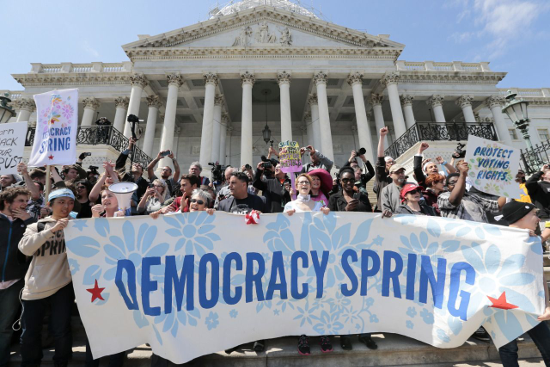 A prominent name among those arrested was Food First advocate Frances Moore Lappe, who said, “Democracy is the way we work together to meet our deepest nonphysical needs: for connection, meaning, and power. Tragically, this promise has been corrupted by a concept of democracy so thin that it’s let a wealthy minority drown out the voices of the people.” 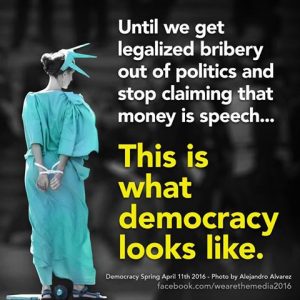 Led by Prof. Lawrence Lessig, on April 2nd, more than one hundred people have signed up to march from Philadelphia to Washington, DC, to protest money in politics.  Over the next 11 days, some plan to walk the entire 140 miles to the capital.

The marchers’ arrival in Washington, DC, will coincide with a larger, related event, Democracy Awakening, calling on elected officials to take a series of actions related to voting rights and campaign finance reform, including voicing their support for a constitutional amendment to overturn Citizens United. Democracy Awakening includes a wide array of groups ranging from the NAACP to unions like the SEIU and environmental groups such as Greenpeace. From April 11-16, they plan to bring their message to Congress with meetings, demonstrations and acts of civil disobedience.

More information may be found here.